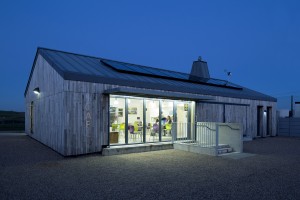 Laura Cartledge heads to Peacehaven and finds a project with community at its roots.

Usually a park is a place to go, perhaps feed the ducks and play on the swings.
But in Peacehaven it is about more than that.

“We want it to be a springboard both to the South Downs and to give people an idea of what they can do,” explains Michelle Porter, engagement officer for the Big Park Project. “It will grow with the community.”
Southern Water had donated the land surrounding its treatment works and alongside two Bovis housing developments the companies have given £2million.
But what to do with it?
A project board of councils, schools and regeneration groups turned to the public for the answer.
“It had over 1,800 replies,” reveals Michelle, “with a place for people to eat, meet and skate coming up most often.”
That was back in 2011 and, following years of teamwork, the park finally opened in March this year.

“People have been really excited about it, it is a really positive thing and something new,” she says.
“All the kids worked with the skate companies and voted on the favourite, so it has belonged to them from the start.
“They have been very patient – it is a long process to get the right people involved.”
The right people includes some you would expect, such as landscapers, and others you may not, like artist Keith Pettit and woodcarver Joel from Playsafe playgrounds.
“That came about later to make it more unique,” Michelle admits. “Keith’s panels reflect the architecture of the site, they are huge.
“I went to see them in the open barn he was working in. They reflect the natural environment as we wanted it to blend in.”
Meanwhile the dragon which circles the toddler’s area was crafted by Joel.

“I just think it looks really beautiful, when the light changes it reflects the sunsets,” she enthuses.
“There has been so much interest and intrigue, people looking through the bars at what is happening.”
Asked what the challenges were, Michelle answers: “Pleasing people as much as you can within budget, that and the weather.
“Other than that it hasn’t been bad,” she smiles. “The public have been really supportive.
“But it is easier when they can see it. Before that I think some people don’t believe it will happen.”
What the project has managed to fit into an area just half a mile across is simply staggering.
The list includes the stunning sculptural pieces, sandpit, tractor swing, climbing logs, skate park and a café.
As well as a community orchard made possible thanks to Brighton Permaculture Trust and plenty of hardworking volunteers.

“They’ve started planting the hedge and in the autumn they will put the trees in,” explains Michelle, adding that this is just one way the project is ‘encouraging people to use the land’.
“We have also had three cycling and walking days which were really popular,” she adds. “There are lots of groups around here and we hope the park will become a hub for them.”
Planned activities are set to include archaeology sessions.
It seems mad to think that there was just ‘a run down playpark’ here before, especially when this is still just the beginning.
“More funding could see more progress,” Michelle agrees. “They couldn’t have everything they wished for in the first place, like the football team wanting a 3G pitch.”
Having said that Michelle believes the thing that makes the park special is that there’s ‘a little something for everyone on the same site’.
“The parents can have a drink in the café, the older kids can go on the skate park. You could have a full day out with your bikes,” she lists. “It is something Peacehaven can be proud of.”

Shortlisted for the Leisure Category – design by Kaner Olette Architects

Kaner Olette, the RIBA chartered Architects behind the Gateway Interpretation Cafe at the Big Park, have been shortlisted for the AJ Retrofit awards 2015. The award was created by The Architects’ Journal to recognise and reward “achievements in design, engineering and construction”. Kaner Olette Architects have been shortlisted for the leisure category for their design to convert a former parks workshop into a cafe and archaeological interpretation centre. This award seeks to reward the “ best work and the brightest thinking” and previous winners have included the Ditchling Museum of Arts and Crafts and Brighton University. The Gateway Cafe building was originally built in 1979 to house a council maintenance depot. Features included an asbestos roof, brick walls and unattractive security fencing. On a modest budget the project was a challenge but Architect Mike Kaner is a keen advocate of retrofitting within Architecture and explains that “The benefits of re-using the existing structure reduces the requirement for demolitions, taking material to landfill as well as the cost and carbon footprint of new materials.Coupled to this the capital costs are kept down. We also like the idea of working within the constraints of re-using buildings and the transformation that can be achieved.” By re using the original footprint of the building disturbance of the important site archaeology was also avoided. The transformation is incredible. The roof was replaced with recyclable zinc and the exterior walls insulated and clad with sweet chestnut which suits the coastal environment. Kaner Olette believe that “ people’s lives can be enhanced through inspirational design and a close relationship with the environment.” With this in mind, the Gateway Interpretation Cafe not only contains carbon reducing features (a wood pellet stove produces hot water and heating and solar panels on the roof produce hot water and electricity) it is also aesthetically pleasing with its framed view of the South Downs National Park and ‘contemporary vernacular’. It really is a great asset, not only to the Big Park but for the local community as a whole.